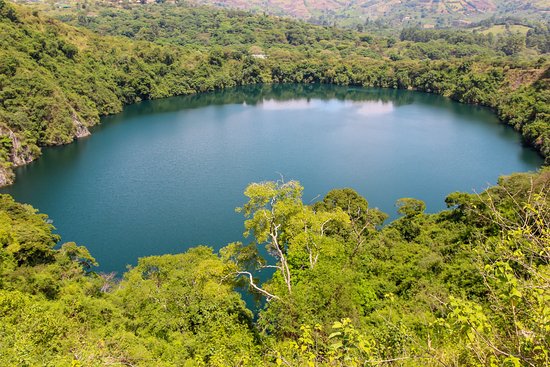 Uganda has truly earned the title of being the ‘Pearl of Africa’ and despite popular belief, its landscape boasts lush greenery and plenty to do.

Winston Churchill once called Uganda “The Pearl Of Africa”, it remains as true now as then. On tourist and government websites you will see Uganda justly called the “Pearl Of Africa.” Often when people think of Africa they think of a hot sunbaked Savanna. But that is certainly not true of Uganda. Uganda is green – very green and the climate is mild, stable, and pleasant and the country boasts a dizzying amount of things to see and do.

Entebbe is a beautiful town on the shores of Lake Victoria and is the site of the Presidental Palace. This is where the country’s international airport is based (if you are coming by plane). Only a short drive away is the country’s largest city of Kampala. This is a bustling city and full of bars and nightlife. If you are a party animal you can have a lot of fun here!

To get around the city, the most common way is to take a motorbike taxi called a “boda boda.” You can ride most places in the city for $2. Uber also works well here.

The source of the Nile is Lake Victoria in Uganda and here you can go whitewater rafting. This is one of the fun and must-do things in Uganda. To go rafting you need to visit the stunning town of Jinja just an hour or two out of Kampala. The rapids you go over here are very large and one should be mentally prepared for this adventure. It’s fun to tip the raft, but when you do, the Nile is powerful, you can get sucked down for an uncomfortable amount of time. But don’t worry, you will pop back up!

Here you can enjoy a whole variety of water sports on the Nile including kayaking and massive waterslides.

Where To Stay In Jinja

In The Town: Jinja Base Camp (Nile River Explorers Is Also Based Here)

On The River: Nile River Camp (White Nile Rafting Is Based Here)

Uganda is also home to some of the rare mountain gorillas. Gorilla trekking is one of the main attractions of Uganda and this is located on the western side of Uganda close to Rwanda and Congo in the Bwindi National Park.

The equator runs through Uganda (in fact when you arrive at the airport you will be only around 20 miles north from the equator). So you can easily travel and see the equator in Uganda. You will likely see demonstrations of the Coriolis Effect. These are fake but entertaining. The Coriolis Effect only has a measurable effect on large areas like hurricanes. At the equator, the effect is also the weakest.

Fun Fact: The Coriolis Effect Is Real, But It Does Not Make Toilets Or Sinks Swirl In Opposite Directions

Queen Elizabeth National Park is another of the western and popular national parks in Uganda and one of the best places in Africa to go on a Safari. It is around 250 miles from Kampala and was established back in 1952. You can see a whole range of animals in this large national park including; elephants, lions, hippos, Nile crocodiles, waterbuck, giant forest hog, leopards, African buffalo, and many many more animals. There are also over 500 bird species here.

Uganda is a great country and it is very diverse. Partly this is because of being situated on the equator and having a range in elevations. This creates a varied landscape great for different species of animals. There are many other tourist hotspots in the Pearl Of Africa and these are just a few of them.

Other Popular Activities And Places To Visit:

Birdwatching: Uganda Is Home To Many Species Of Birds