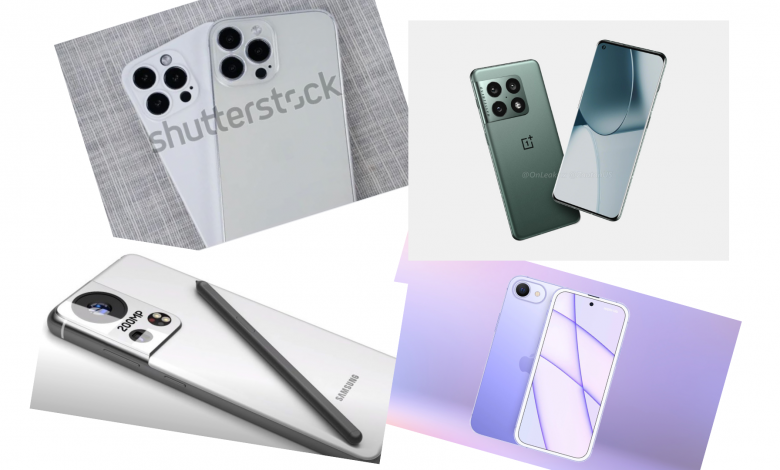 We are only a few weeks away from the new year, and many of the smartphones that debuted this year easily made the top list of best smartphones.

2021 brought the Google Pixel 6 and Apple iPhone 13, but we are excited to see what 2022 has in store in terms of smartphone launches.

There’s already plenty to look forward to in 2022 — including new budget-friendly phones from Samsung and Apple that may launch in the first half of the year.

A giant new version of the standard iPhone and a Samsung phone that could feel like a real successor to the Galaxy Note are also reportedly in the pipeline for later in the year.

Here’s a look at the smartphones we’re looking forward to most in 2022 based on rumors and reports that have surfaced so far.

Apple refreshed its $400 budget iPhone for the first time in four years in 2020, but it looks like we won’t have to wait that long for the third-generation model. The iPhone SE 3 could launch in the first half of 2022, according to a note from analyst Ming-Chi Kuo that MacRumors reported.

t’s expected to get 5G support and a boost in performance, thanks to the addition of Apple’s A15 Bionic chip, the same processor that powers the iPhone 13, according to Nikkei Asian Review. The current iPhone SE, by comparison, runs on Apple’s older A13 Bionic processor from the iPhone 11.

The next-generation iPhone SE might also be the first to get Face ID, Bloomberg’s Mark Gurman wrote in his Power On newsletter. The 2020 iPhone SE and 2016 version both have Touch ID since they still have the physical home button.

But reports are conflicted over whether the next iPhone SE will get a makeover or retain its retro look. Kuo says it will likely have a similar design that’s the same size as the current model, according to MacRumors, while the Chinese tech site MyDrivers suggests it will look more like the iPhone XR.

The second-generation iPhone SE stands out for its balance of great performance, affordability and portability. Based on the reports that have circulated so far, it sounds like Apple plans to expand on that by giving the iPhone SE some more modern features while hopefully retaining the qualities that have made it so appealing in the first place.

The iPhone 13 is just a few months old, but that doesn’t mean it’s too soon to start talking about the iPhone 14. The biggest upgrades we’re expecting to see from next year’s flagship iPhone come down to the camera, design and screen size options.

But it’s the reported iPhone 14 Max that I’m most excited about, which is said to be a super-size version of Apple’s standard next-gen iPhone.

Apple’s iPhone 14 Max will seemingly be aimed at those who want a larger screen but don’t necessarily care about the other upgrades that come with Apple’s Pro line, like a triple-lens camera and Lidar sensor.

It could be a great choice for iPhone fans that have been waiting for a gigantic display but don’t want to splurge on the $1,099 iPhone 13 Pro Max.

There are some other exciting upgrades reportedly in store for the rest of the iPhone 14 lineup that could make it feel like more of a leap than the iPhone 13.

The Pro and Pro Max versions of Apple’s 2022 iPhone may have a 48-megapixel wide rear camera, reports Kuo in a note reported by 9to5Mac. That’s a noticeable jump from the iPhone 13 Pro’s 12-megapixel camera system.

In terms of design, 2022 might be the year Apple says goodbye to one of the iPhone’s most polarizing physical traits: the notch. Kuo also notes that the iPhone 14 lineup could have a hole punch cutout for the front camera, but only on the iPhone 14 Pro and Pro Max models.

That falls in line with a previous report from Bloomberg’s Mark Gurman which said Apple has been working on a notch-free design for future iPhones.

The iPhone 14 lineup will likely launch in September, as is usually the case with Apple’s major smartphone releases.

With its spacious screen and S-Pen support, the Galaxy S21 Ultra is a worthwhile alternative for Galaxy Note fans. But at the same time, the S-Pen experience felt a little half-baked compared to the Note’s functionality.

For one, the S21 Ultra doesn’t come with an S-Pen in the box, there’s no slot built into the phone for storing it, and it lacks Bluetooth and gesture support for the S-Pen.

But Samsung could address at least one of those concerns with the Galaxy S22 Ultra. A leak from Front Page Tech suggests the Galaxy S22 Ultra may come with a storage slot for the S-Pen, making it much easier to keep track of Samsung’s stylus without losing it.

A built-in slot also hints that the S-Pen may come in the box with the S22 instead of being sold separately as an optional accessory.

Otherwise, rumors suggest that the Galaxy S22 Ultra will have a camera system with continuous optical zoom, according to leaks from Ice Universe. That would result in a crisper, uncropped zoom when switching between focal lengths.

All told, the upgrades we’re expecting to see could make the Galaxy S22 Ultra an even more compelling choice for Galaxy Note loyalists, or for those seeking a super-powerful camera phone. Samsung typically reveals its new Galaxy lineup in the January through March time window, so we likely won’t have to wait much longer to learn more.

Samsung’s budget-friendly Galaxy S20 FE is known for the incredible value it offered for the price. With 5G, great performance, and a multilens camera, it was a much-needed budget option that fit nicely alongside the premium Galaxy S20 lineup.

Now, Samsung is planning to launch a sequel called the Galaxy S21 FE in January, according to the Korean new website DDaily. However, if that report turns out to be true, the phone will only be available in Europe. That would be a loss for the US, where Samsung is the second-largest smartphone maker behind Apple.

Another aspect I’m curious about, though, is how Samsung plans to differentiate this year’s “Fan Edition” phone from other mid-range options like the $500 Galaxy A52 5G, which offers similar features.

There’s a chance Samsung could price it somewhere in between the $800 Galaxy S21 and $500 Galaxy A52 5G, possibly landing it in the $600 to $700 range. That could make it a nice option for those who want a phone that feels a bit premium but isn’t quite as expensive as the S21 family.

As for what we can expect from the Galaxy S21 FE, Samsung’s next midrange phone may have a 6.4-inch screen with a 2,340 by 1,080 resolution and three cameras that include a 32-megapixel, 12-megapixel and 8-megapixel lenses, according to specifications that appeared on China’s TENAA Certifications website, which MyFixGuide reported.

It could also come with a Qualcomm Snapdragon 888 processor, according to a leak that surfaced on the Google Play Console, which was also spotted by MyFixGuide.

That could be one way in which Samsung distinguishes the Galaxy S21 FE from the Galaxy A52 5G, which comes with a less powerful Qualcomm Snapdragon 750G 5G chip. The Galaxy S21 FE is also expected to be similar in appearance to the Galaxy S21, as shown in renders published by prolific leaker Evan Blass.

OnePlus made a name for itself by offering phones with hardware capabilities that could compete with the likes of Samsung at cheaper prices. More recently, its premium “Pro” lineup has gained notoriety.”

If the rumors hold true, the same may be said for the OnePlus 10 Pro, which is expected to come with some camera updates. Renders from high-profile leaker OnLeaks and deals website Zouton claim to show a redesigned camera bump on the OnePlus 10 Pro.

The camera system appears to include three lenses like the OnePlus 9 Pro, but with a new arrangement that more closely resembles the quadruple-lens camera setup on the Samsung Galaxy S21 Ultra.

It’s too soon to know how significant of an upgrade the OnePlus 10 Pro will be over its predecessor. But if camera upgrades truly are in store for OnePlus’ next high-end phone, it could address one of our only complaints. While the OnePlus 9 Pro’s camera is good, there’s definitely room for improvement.